Thank you for recycling

Last December was a record month for recycling in Westminster. At Commercial Waste Services, we are incredibly proud of our customers and their efforts to increase their recycling rates. We duly noticed your efforts to recycle more and recycle better.

December is traditionally a month of festivities, enjoying the good things in life, observance and celebration. Unfortunately, this can easily result in extra waste produced from all that has been consumed, bought and used.

December is always a peak month for the City Council’s waste management service, but December 2019 set particular records. The majority of this large increase in collected tonnage was due to 20% more recyclable waste overall being segregated and presented for collection. Commercial Waste Services (CWS) is very proud of its customers and the effort made to recycle more and recycle better.

Facts and figures from last month

CWS saw a 36% increase in segregated glass collected compared to December last year. This glass was all sent straight for reprocessing into new packaging glass. The CO2 saving from recycling this glass is equivalent to 983 passengers making an economy class return flight from London to New York City.

Food waste collected from businesses increased by 29%. All of this extra food waste produced over the festive period was turned into biogas and fertiliser for agricultural land. The left-overs from all the celebrations will provide nutrients for the next harvest season’s crops. Last December’s food waste produced enough fertiliser to grow the equivalent in wheat for around 78,000 loaves of bread.

A staggering amount of paper and cardboard was presented separately for recycling by our retail customers, we collected nearly 20% more than usual. This material is of very high quality and goes directly to a recycling mill in Kent where it is turned back into new paper, which is used for cardboard boxes for some of the UK’s most well-known retailers.

And whilst general waste (i.e. what cannot or should not be recycled) also increased compared to November, its tonnage was still 4% less than the previous year. This shows the effort made to segregate more materials for recycling rather than throwing them away as general waste. The general waste we picked up in December was used to generate enough electricity to roast the equivalent of 915,342 Christmas dinner turkeys.

Businesses also recycled better and ensured what can genuinely be recycled was placed out for the recycling collection. As a result, only 900 kg worth of unrecyclable items were rejected by the Southwark sorting facility for mixed recycling in December.

Have a look at the end destinations of all waste streams we collected on our map.

The Hart of London was back for a second year. Designed by acclaimed artist Faith 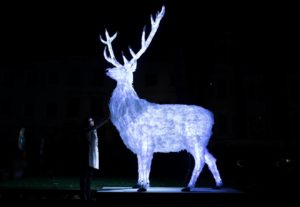 Bebbington, the stag was installed in St. James’s Church gardens in the West End through a collaboration between HOLBA, Veolia and Westminster City Council. The illuminated, life-size white deer or ‘Hart’ – aptly named Hart of London – had been created to remind the public about plastic waste consumption, encouraging visitors to recycle and reuse plastic more this Christmas. Proceeds from its donations went towards the Church’s work in the local community: free counselling services, night shelters for the homeless and support for asylum seekers.

The Giving Bear in Mount Street 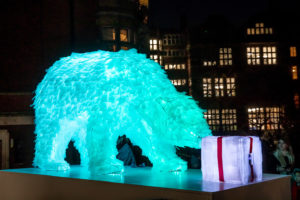 Gardens was a joint initiative by Veolia, NWEC and Westminster City Council symbolising important messages around environmental awareness, climate change and homelessness. Created by students from the Kingston School of Art’s Creative Industries, The Giving Bear illustrates the story of a polar bear who loses his home as a result of climate change. Finding himself homeless in London’s Mount Street Gardens, he encounters unexpected kindness through a small gift that reminds him of home.

The generous donations by the public went to help The Hidden Network rebuilding the lives of people sleeping rough.

We hope reading about all the positive environmental achievements December has brought us has inspired and motivated you. The New Year brought new resolutions and we encourage wasting less and recycling more to be part of yours. Now is a time to push yourself to achieve even more than last year. We would be delighted to help you assess where improvements can be made. Talk to us now for a no-obligation waste audit, where we survey your waste management set-up and make recommendations to improve it.