The amount of waste electrical and electronic appliances (WEEE) produced globally is rising three times faster than the world’s population. It contains a lot of valuable and scarce materials such as copper, gold, platinum and other precious metals which are estimated to be worth around £7.9 billion. WEEE is also one of the waste streams with the highest carbon impact, alongside plastics, food waste and textiles.

Every year, residents and businesses in the UK throws away a staggering £1.6M tonnes of WEEE. This volume of WEEE is enough to fill 160,000 of our refuse collection trucks. This £1.6M tonnes works out at nearly 24 kg for every person living in the UK, one of the highest figures in Europe. There are specific regulations in place to ensure household and businesses can keep WEEE separate for recycling. Currently, around 60% of WEEE is handed in for recycling in the UK however more needs to be done to increase this.

In this episode we follow what happens to part of the 250-odd tonnes of WEEE collected by Westminster City Council for safe destruction and recycling every year.

In the past, most WEEE was simply thrown away in the bin and forgotten about. Until 2002 it was perfectly acceptable and legal in the UK to dispose of end-of-life fridges and white goods as bulky waste, crush them in the truck and send them off to landfill. Fridges contain oils and gases which can harm the environment if they aren’t recycled properly. Most of the CFC and other ozone depleting substances contained in fridges simply ended up being released into the atmosphere. 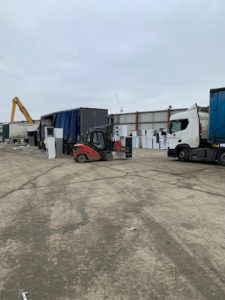 New regulations around the disposal of fridges were brought in which initially led to the so called ‘fridge mountain’ due to the lack of specialist treatment and recycling infrastructure available.

Thankfully much has changed and in Westminster alone we now send around 3000 fridges for safe dismantling and recycling every year.

The fridges and other large domestic appliances, LDA, otherwise known as ‘white goods’, we collect from Westminster homes and businesses are sent to a specialist recycling plant in Willesden, northwest London, that prepares them for recycling.

This plant is one of 14 in the UK equipped to take out the hazardous materials and greenhouse gases contained in fridges.

Arrival and acceptance at the site 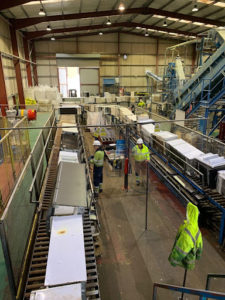 Every day we collect fridges and other white goods from homes and businesses across Westminster. After collection we take them to the Willesden site where they are weighed, categorised, unloaded and stored until they can be processed. This is important since every fridge and appliance that arrives at the site needs to be accounted for and reported to the producer compliance scheme for WEEE. This needs to happen since anyone who makes, distributes, imports or (re)sells electronics is legally required to pay for the collection and recycling of each tonne of appliances they put on the market. This is called extended producer responsibility (EPR). 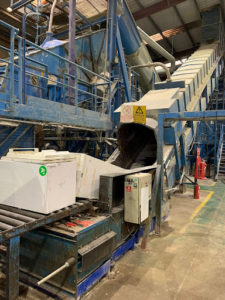 Feed conveyor of the fridge shredder

After initial storage, the fridges are taken into the recycling plant’s processing hall. First any shelves, trays and other similar items are removed. At times the plant receives fridges still full of food which by now has started rotting. As such please always empty out your end-of-life fridge before having it collected.

The fridges are placed on a roller conveyor and any hazardous refrigerants and oils, which are contained in the black compressor pot, are removed. These gases are captured in large cylinders and taken away for recycling when they can serve another purpose or for high temperature incineration when they need to be destroyed.

Following the removal of any refrigerants and hazardous items the fridges are fed into a customised shredder which disintegrates them using large heavy chains. This happens in a nitrogen filled chamber to avoid any risk of explosion. Any gases used in the insulation foam of fridges are extracted during the process and stored for recovery or recycling.

Once the fridges have been broken down, they can be sorted into the various types of metals used to make fridges such as copper, aluminium and steel. This is done magnetically for ferrous metal and by using an eddy current to separate non-ferrous metals. An eddy current reverses the metal’s polarity temporarily so it can becomes magnetic.

Not much is left now of the fridge other than chunks of various types of metals which are of a high quality and are taken to arc furnaces for smelting. Sometimes this happens in the UK but, since most of our metal industry has closed since the 1980s, metals from the Southeast are often sold and recycled in furnaces abroad. A small percentage of residue is left after fridges are processed which is turned into fuel for the cement industry.

Peace of mind through safe recycling

By having your WEEE collected by Commercial Waste Services you can be assured that everything only ends up where it’s supposed to go. We wouldn’t have it any other way.  Most of the waste and recycling we collect is processed within a short drive from Westminster. We use local waste management facilities where waste is either turned into energy or sorted and prepared for recycling.

We would be happy to tell you more about using our WEEE collections. Simply get in touch with us now so we can help.